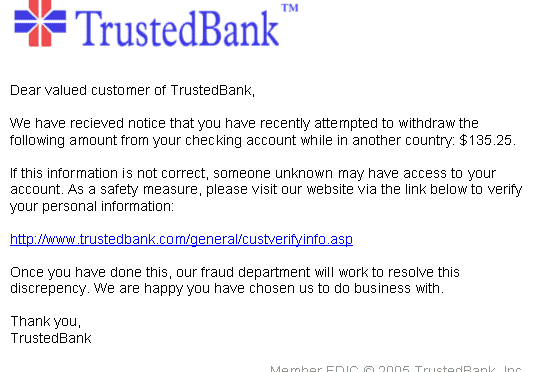 Phishing is the attempt to acquire sensitive information such as usernames, passwords, and credit card details (and sometimes, indirectly, money) by masquerading as a trustworthy entity in an electronic communication. Communications purporting to be from popular social web sites, auction sites, banks, online payment processors or IT administrators are commonly used to lure unsuspecting public. Phishing emails may contain links to websites that are infected with malware. Phishing is typically carried out by email spoofing or instant messaging, and it often directs users to enter details at a fake website whose look and feel are almost identical to the legitimate one. Phishing is an example of social engineering techniques used to deceive users, and exploits the poor usability of current web security technologies. Attempts to deal with the growing number of reported phishing incidents include legislation, user training, public awareness, and technical security measures. Many websites have now created secondary tools for applications, like maps for games, but they should be clearly marked as to who wrote them, and you should not use the same passwords anywhere on the internet.

As recently as 2007, the adoption of anti-phishing strategies by businesses needing to protect personal and financial information was low. Now there are several different techniques to combat phishing, including legislation and technology created specifically to protect against phishing. These techniques include steps that can be taken by individuals, as well as by organizations. Phone, web site, and email phishing can now be reported to authorities, as described below.

People can take steps to avoid phishing attempts by slightly modifying their browsing habits. When contacted about an account needing to be “verified” (or any other topic used by phishers), it is a sensible precaution to contact the company from which the email apparently originates to check that the email is legitimate. Alternatively, the address that the individual knows is the company’s genuine website can be typed into the address bar of the browser, rather than trusting any hyperlinks in the suspected phishing message.

Nearly all legitimate e-mail messages from companies to their customers contain an item of information that is not readily available to phishers. Some companies, for example PayPal, always address their customers by their username in emails, so if an email addresses the recipient in a generic fashion (“Dear PayPal customer”) it is likely to be an attempt at phishing. Emails from banks and credit card companies often include partial account numbers.

Some newer browsers, such as Internet Explorer 8, display the entire URL in grey, with just the domain name itself in black, as a means of assisting users in identifying fraudulent URLs.

The standard display for secure browsing from the mid-1990s to mid-2000s was the padlock. In 2005, Mozilla fielded a yellow address bar as a better indication of the secure connection. This innovation was later reversed due to the EV certificates, which replaced certain certificates providing a high level of organization identity verification with a green display, and other certificates with an extended blue favicon box to the left of the URL bar (in addition to the switch from “http” to “https” in the url itself).

Another popular approach to fighting phishing is to maintain a list of known phishing sites and to check websites against the list. Microsoft’s IE7 browser, Mozilla Firefox 2.0, Safari 3.2, and Opera all contain this type of anti-phishing measure. Firefox 2 used Google anti-phishing software. Opera 9.1 uses live blacklists from Phishtank and GeoTrust, as well as live whitelists from GeoTrust. Some implementations of this approach send the visited URLs to a central service to be checked, which has raised concerns about privacy. According to a report by Mozilla in late 2006, Firefox 2 was found to be more effective than Internet Explorer 7 at detecting fraudulent sites in a study by an independent software testing company.

An approach introduced in mid-2006 involves switching to a special DNS service that filters out known phishing domains: this will work with any browser, and is similar in principle to using a hosts file to block web adverts.

The Bank of America’s website is one of several that ask users to select a personal image, and display this user-selected image with any forms that request a password. Users of the bank’s online services are instructed to enter a password only when they see the image they selected. However, a recent study suggests few users refrain from entering their password when images are absent. In addition, this feature (like other forms of two-factor authentication) is susceptible to other attacks, such as those suffered by Scandinavian bank Nordea in late 2005, and Citibank in 2006.

A similar system, in which an automatically generated “Identity Cue” consisting of a colored word within a colored box is displayed to each website user, is in use at other financial institutions.

Solutions have also emerged using the mobile phone (smartphone) as a second channel for verification and authorization of banking transactions.